Carnton Plantation Franklin Tennessee was established in 1826. Carnton was the home of Randal McGavock, an early Tennessee pioneer and former mayor of Nashville. At its peak, Carnton Plantation held sway over 1400 acres, eleven slave quarters and 39 slaves.

In all, nearly 10,000 Americans were casualties at the Battle of Franklin and about three-fourths of that number were Confederate Army. In 1866, 1481 Confederate soldiers killed at Franklin were removed and reinterred at Carnton Plantation where John McGavock donated two acres of land adjacent to the McGavock Family cemetery as a final resting place.

Today, the property is part of the Battle of Franklin National Historic Landmark and the house is restored to its mid 19th century grandeur with period wallpapers, textiles and furnishings. Carnton’s mid-19th century garden adjacent to the house has also been recreated with loving detail.

Carnton Plantation offers guided tours every day of the week. The guided tour at Carnton lasts about one hour, and guests should expect to spend another half hour to one hour exploring the grounds and outbuildings.

Maps of the plantation are provided with the price admission to aid in your exploration of the grounds and gardens. Guests are welcome to take their time and explore the plantation grounds and McGavock Confederate Cemetery, the largest privately owned military cemetery in the United States.
Included in your admission price is a tour of the Carter House. The Carter Farm is one mile from Carnton Plantation and was ground zero during the Battle of Franklin. In fact, the Carter Family took refuge in the basement of their home while the fighting raged all around them. Save at least one hour to tour the Carter House and learn about one of the most harrowing stories of the Civil War. 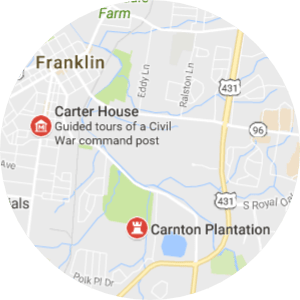 For history loving Civil War enthusiasts, the Tennessee Antebellum Trail Civil War Tour sample itinerary will help guide you along as you go from plantation to battlefield and from cemetery to monument.

For all the thrill seeking spooky history fans and fanatics, there is a tour made just for you – the one of a kind Tennessee Antebellum Trail Ghost Tour! Walk The Hermitage mansion and cemetery grounds by lantern. Conduct a paranormal investigation at Rippavilla. Take a candlelit evening cemetery tour in Franklin. So, if you’re looking for ghosts, you can find plenty of them on the Tennessee Antebellum Trail!