Although, there are no set itineraries for the Tennessee Antebellum Trail – you tour at your own leisure – the following guide is a sample trip planner for the Civil War aficionado. 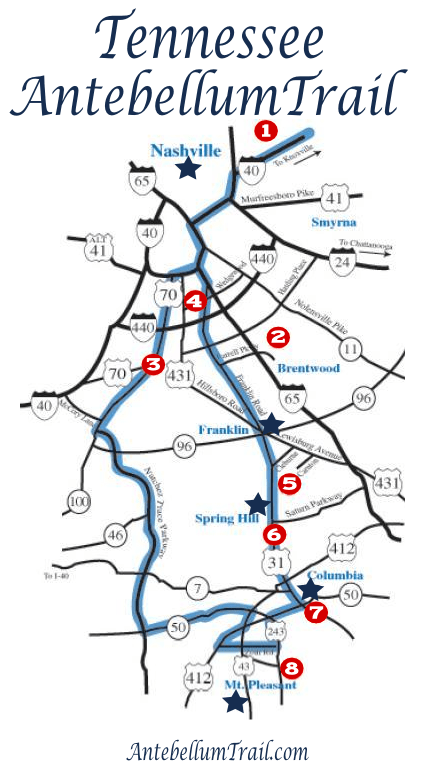 Start your tour at Rattle and Snap Plantation

to retrace the route of the Confederate Army of Tennessee as the Johnny Rebs sought to re-take Nashville in November 1864.

Make the short drive into Franklin and have lunch at one of the many delightful cafes on Main Street. You won’t want to miss the magnificent Civil War monument on the square!

Spend the afternoon at Carnton Plantation

where Rebel forces established a field hospital as they repeatedly charged the Union troops entrenched on the southern edge of Franklin.

Hundreds of wounded and dying were brought to Carnton during the battle. By the end of that bloody day, the bodies of four Confederate generals were laid out on the back porch.

In 1866, two acres at Carnton were designated for the reinterment of Southerners killed at Franklin. With some 1,500 graves, the McGavock Confederate Cemetery is the largest private military cemetery in the country.

Take the short drive back into Nashville and enjoy all the food and fun the city has to offer. Make sure you stay in one of the charming bed and breakfasts that dot the city, but don’t stay up all night – you need to get an early start tomorrow!

, some seven miles from Nashville, served as headquarters of Confederate General Chalmers who was forced to abandon this sanctuary when Rebel forces failed to take the city.

Start your day with breakfast in the historic Carriage House and tour the Mansion and eight other buildings on the grounds. Belle Meade is known as the Queen of Southern Plantations.

Continue your tour at Belmont Mansion

, home to one of the true Steel Magnolias, Adelicia Acklen. It was Adelicia who ran the Union blockade to make millions by selling her cotton in England.

After touring the mansion, lunch in the lovely Grand Salon before leaving for the next stop. The famed peach orchards of Travellers Rest

offered a resting spot for the retreating Confederates at least until Union Troops caught up with them. Today, all is peaceful, and while there you can truly rest and relax with a peach brandy reception on the Back Gallery.

Also, each of these homes feature spectacular holiday events and celebrations especially during Christmas, adding seasonal flair to your itineraries throughout the year.